Tijan & His Liger: A Gallery of Awesome

So...I'm in the process of revamping the blog and likely having some t-shirts made.  And while brainstorming ideas for the Tijan & his liger shirt, I had to indulge myself in the images found below. You're welcome. 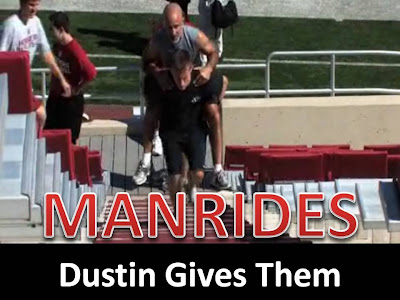 It appears the good folks in IU Media Relations misunderstood my suggestion that press credentials be issued based on the results of a hot dog eating contest.  Instead, they decided to take 25 members of the IU basketball media and subject them to "Survivor-Crean and Crimson Media Challenge."


While it's clear to this observer that by naming this a "survivor challenge," athletics implicitly intends for a majority of the participants not to survive.  Nonetheless, willing participants lined up at the chance to have Je'Ney Jackson kick their ass and humiliate them in front of their peers.
So, let's take a look at the events, handicap the participants, and vote on the most likely outcomes. 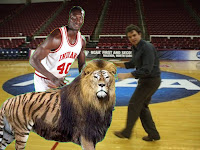 After having pestered him for the better part of his four years at the Herald-Times, Chris Korman graciously agreed to sit down with me at Nick's several weeks ago and provided the Hoosier Chronicles with its first interview.  As luck would have it, the day was Friday the 13th.  As I would have it, we laughed heartily, drank heavily, and talked Hoosiers over the course of an entire afternoon- Korman's last afternoon working for the H-T.


Why do you hate Bloomington?
(Laughter) Ah, man, I absolutely do not hate Bloomington.  That is definitely a falsehood.  Dustin and I are two Penn State guys from State College, and I think he would probably agree, I know I definitely feel that Bloomington has such a better vibe.  It's got the little Midwest thing to it.  It's got a little bit of the southern thing to it.  You know, it's like I talked a little bit about on the chat the other day, it's this stuck in the middle place.  And then it hates both of those things, too.  It's like "We're Bloomington. We're totally different.