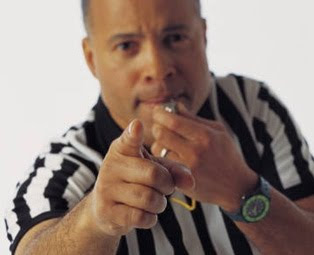 The Ilini Whistle Stop Tour blew threw Assembly Hall (the one with the banners, that is, not the space ship) tonight like the shuddering winds that Bloomington has grown accustomed to lately.

And man was it cold.

Following a half spent watching some of IU's most inspired play this season, it seemed inevitable that winds of fortune were going to change direction when play resumed.  And just as surely as you can count on Bruce Weber making an ass out of himself on the bench, IU's luck slowly froze up in the critical final minutes of the game.

Gone were the grit and toughness Tom Crean had all but begged for following the embarrassment that was the OSU game.  Gone was the team ball on both ends of the court that propelled IU to a 13 point halftime lead.  Gone was our ability to keep Illinois from exploiting Tisdale & McCamey's inside-out effectiveness against our undersized squad.  In the end, we were left only with a magnet for whistles tied around our necks, a recurring paralysis at the free throw line, and a healthy serving of some vintage Bruce Weber whine.

And without resorting to the moral victory trap which Tom Crean avoids at all costs, there were some promising signs in tonight's performance.  Bobby Capobianco earned his first start and repaied the honor by plastering his body against any Illini within his reach and pulling down a couple boards, while keeping several more alive off his tips.  Though his 2 points came off of the only field goal attempted, it's not a stretch to imagine him filling in more in place of Tom Bitchard, who in almost as many minutes as Capo was able to pull down 3 boards, 0 points, and 4 impressive fouls.

Hulls not only continues to display more confidence in his jumper, but the team increasingly feeds off of his leadership.  The ball rotation that led to his open looks was tremendous.  Similarly, the communication on defense also seemed to peak during this period.

Rivers, likewise, seemed to find his stroke a bit and let his defense fuel his offense.  (For the life of me, however, I will never understand how a guard who's dad is a fucking NBA coach can be so abysmal from the line.  Seriously.  It's beyond comprehension.)

Having no idea what in the hell is going on in practices, save the absence of shoulder pads this week (wtf, Weber?), I'm left wondering what's driven a wedge between Elston and his prior playing time.  Reduced to Danny Moore minutes tonight, Elston seemed to bring the inside toughness Crean has been lacking.  I'm just not sure what gives there.

Bitchard, you're possibly the biggest pussy ever to dawn an Indiana jersey.  Dude, you're 6'9", 250 lbs.  Fucking do something with that big ass body to justify your minutes, if not also your scholarship.  Play with some pride and find a way to contribute something to your team.  It appears Crean is squarely referring to you in most of his disgruntled comments about lazy bullshit.  Get it together or get to looking for a place to transfer.

If there's any cold comfort to take away from this game, nay this season, it seems few teams are as capable as the Hoosiers in beating IU.  We simply seem to lose more games on our own than the other teams beat us.  And while that's correctable, well, that still blows.