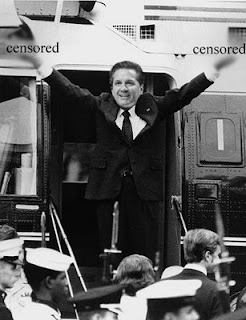 For a second there, I had to wipe my eyes and remind myself I wasn't at Memorial Stadium. (Aside from the banners, the packed & raucous crowd, and competent coaching) It seemed as though the basketball team had taken on the identity of the football Hoosiers: an unbelievably effective 1st half performance followed by a tremendous, and predictable, letdown in the 2nd half.


If nothing else, Mo Creek picked a helluva occasion to make his coming out party. On an afternoon that everyone expected to be owned by Blue Jesus, it was Creek that shined the brightest. Sure, Bledsoe was largely the deciding player in the game, but without Creek, IU would've looked about as fit for the Cats as it did last year. Had Creek shot his season avg. going into the game, it'd been a 30+ point blow-out. He was HUGE.

Other points of interest:
-Game-day traffic was a bad as I've seen it in a long time around Assembly Hall: about 35 minutes from the time I first hit the breaks until I finally pulled into my spot. Glass should take a look at that as he did with football. While football draws far more people, at least their arrival times are more dispersed due to tailgating. 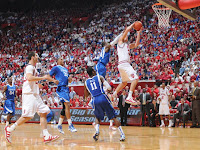 -The Stripe-Out was as grabasstic as I've seen any attire-themed promotion at IU. Fucking pathetic. If you're going to do it, do it right, and do something red. Even the tenured cotton balls in the sweet seats won't fuck it up- you can always count on them to show up early, wear red, and be eager to sit down through even the most riveting of contests. 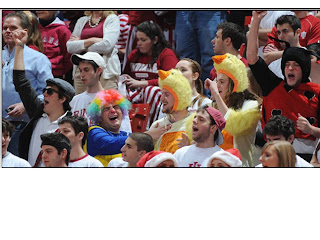 -Another thing, the costumes have gotten out of control. Throw in the big heads, and it's like a complete fucking circus in the student section. It's like they can't decide if they're going to a basketball game or a masquerade ball. If nothing else, at least try to tie in something IU-related in the costumes. Otherwise, you just look like an attention-whoring asshole preening for your 4 seconds on the fan cam.


-Speaking of pathetic attire decisions, our newly minted "Crimson Guard" student section shirts arrived & THEY'RE WHITE!!! Who the fuck made the decision to name them "Crimson" anything and then dawn them in white shirts?!?! Unfuckingbelievable. Some dipshit, drunk guido who seemingly learned everything he knows about IU basketball from the neons & mirrors at Sports told me they were free. I suspect athletics pushed the roll-out of the student section naming & the shirts way too fast & without the proper resourcing to make it work. Pass the torch to the S.A.B. & let them sell the fucking things, printed on red shirts, for a nominal fee that'll support whatever the hell it is that they do. Can you imagine the Orange Crush in white? It's mind boggling retarded to even think that someone thought this was a good idea. Oh, shit. Pardon me if I forgot this blog was about basketball for a second. The prior issues just started my day off on the wrong foot.

-From the way the Hoosiers came out of the gate, it's clear to see that: a) Crean & his staff game plan with the best in the nation; b) the team is buying into what the coaches are selling; and c) we can compete with some damn good teams when we're motivated and properly focused (just not quite yet for 40 minutes).

-After his 3rd 3-ball, I kept waiting for this to happen every time Creek shot the ball. The kid was en fuego. When the 3's are falling, we can get away with being inept inside. Problem is, few team can shoot that way the entire game. Once Kentucky began defending the 3-line, the shots dried up. And without any meaningful penetration to kick out from, we just don't have the sets to create good looks from the arch.

-I'm pretty sure I've seen better boxing out in paraplegic leagues than I did today. Seriously. It was atrocious. You'd think that anyone who's played with Dumes for more than a week would be ready to rebound.

-I'm at a loss to understand why Pritchard starts. His box score reads like he's the 3rd guy off the bench- though he does lead the team in fouls. If his only role is to hack away at the other teams' bigs, why not let Tijan or Bawa fill in to goon it up? At least they'd get the crowd into it and maybe scare the shit out of some people. How much longer can he keep Elston from stealing his spot?

-Our response to zone defense is frighteningly perplexed. Without any capable attackers or designed action (read: MOVEMENT) we will see it every game when we're starting to build some offensive momentum. Points off turnovers may bridge some of the gap, but we've got to learn to break down the zone. As my brother loves to point out, most players learned the basic concepts of this counter-offense around 6th grade, & I'm still at a loss to understand why Crean and his staff haven't come up with some action to counter it yet.


-All in all, it was a decent outing. While I never like to see us give up 90 in the Hall, I never expected us to put up 73 on Kentucky. Holding Wall to 11 may someday be spoken of in the same breath as Dakich's defensive performance against MJ. Lucky for us, Jesus will have left Lexington by the time we head down there next year. We're showing measurable signs of improvement with each game. Unfortunately, I'm using a tape measurer for a job better suited for an odometer.