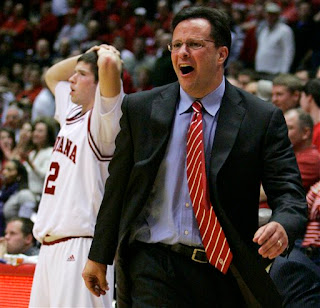 For IU fans, however, both have become our new realities. Last night's game against Michigan provided fans with exactly 20 minutes of each. (Those 5 bonus minutes at the end don't count in either category. Rather, they only served to give the team a lifetime's worth of motivation to perform at the free throw line in the future.)

Instead of devoting an entire post to the devastating and dichotomous tendencies of this young team, I'll reduce it to 4 words, the very same words I'd utter to any teenager participating in unprotected sex just before the final horn is about to blow: PULL IT OUT, SON!!!!!

Oh, Devan. Like the Duggar family, you've just got to learn when to pull it out.

Nope, there's no need to get into the gut-twisting events of last night. No need to bitch about swallowed whistles, 28 foot 3's, or consecutive 20-point-leads blown at home.

Instead, I'm going to share a story about a guy I met in the concessions line at halftime. While I never got his name, we both shared a look of exuberance and anxiety while waiting in line for some snacks next to one another. Upon seeing his expression and feeling the same way he looked, I asked if he was at the Hall for the Lipscomb game.

He responded in the negative, and said this was the first game he'd been to in a long time. He explained that, earlier in the summer, he'd seen an article in the Star which mentioned that Crean receives 60 tickets per game as part of his contract.

My friend of the foot-longs explained to me that he then wrote Crean a letter, welcoming him to IU, thanking him for his energy and optimism, and asking for consideration if Crean should ever find himself holding on to a couple of extra tickets.

As it turns out, the guy's phone rang Tuesday. The caller was Tom Crean, and he wondered if one day's notice was too short to come down to Bloomington and catch the conference home opener.

My popcorn pal said he'd have been out the door and in the car had Crean called 20 minutes before tip. The extra time, he said, allowed him to bring his daughter with him.

The elderly gentleman never indicated where his seats were, but I noticed him return to the gym through the Section J tunnel and proceed downwards. Half-court seats, below the tunnels, not too shabby for some postal pandering.

With every game, press conference, and interview, Crean gives me something to make me respect him even more.

As if last night's opening half, and the pre-game preparations it reflected, weren't enough, this man's story left me with enough respect for Crean to last the entire season.

On the way out of the lobby, I saw my friend again. He noticed the look of apparent devastation on my face, smiled, and said, "You know that's the same team that beat UCLA and Duke this season? We almost had 'em, didn't we?"

Begrudgingly, I concurred, "Yes we did. Almost had 'em."

Looking back, we may have lost the game, but there's no doubt in my mind that Crean won a fan for life last night.